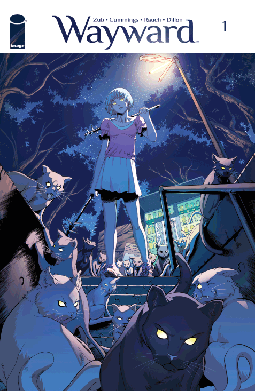 Summary: A young girl, Rori Lane, has moved to Tokyo to live with her mother and to start things fresh. Shortly after touching down Rori finds herself embroiled in a supernatural battle brewing just below the surface.

“Focus on something real”

Image Comics, one of the most diverse publishing houses in the comic medium, has a comic out there for literally any type of reader. From sci-fi to fantasy, superhero to horror and comedy to noir; anyone can find something to love when it comes to the Image brand. The library is so vast that it was honestly only a matter of time until we received a Western writers take on the fantastical Yōkai folklore that embodies so much of Eastern Japanese culture. Unfortunately, unlike much of Image’s catalogue, Wayward doesn’t quite prove itself worthy to stand side by side next to titles such as Saga, Invincible and The Walking Dead. At least not yet.

Wayward Volume One collects the series first five issues and follows the life of Rori Lane, a young girl of Japanese and Irish descent who has left her father and his problems behind in Ireland to live with her mother in Tokyo. Shortly after arriving Rori, who is understandably both excited and nervous at this life transition, begins to see strange shapes in the world that guide and beckon her onward, but are these ethereal tendrils leading her to salvation, or damnation?

The driving force of this first volume is certainly the mystery of Rori’s newfound abilities and what they mean, but that larger narrative is coupled with introductions and brief stories of other characters that she comes across, unfortunately to the detriment of Wayward’s pacing. The balancing act of slowly peeling back the curtain on Rori’s powers as well as introducing and fleshing out the series cast isn’t always in sync. Both threads fight for the limited page count that comics adhere to and ultimately by the end of Volume One the reader is left feeling somewhat let down, as they are no closer to figuring out the mystery of her gift as they are of getting a grasp on who these characters actually are.

Four out of the five issues within this first chapter introduce a new character and, oddly enough, outside of those initial introductions you never really learn anything else about them. The supporting cast are rather one note with their special ability generally defining who they are and how you will come to remember them. By Volumes end Rori will be leading a party of four and the two males within her group, who I legitimately cannot name, feel as if they could have easily been held back for introductions later in the story.

A character that is better served, albeit one you still learn very little about, is that of Ayane, Rori’s first “friend” in Tokyo. Ayane leaps into the story near the closing moments of the first issue and from that introductory splash page she is instantly memorable and intriguing. Bubbling with energy and an innocence that beguiles, Ayane is easily the most charismatic of the bunch and livens up every panel she is in, oftentimes breathing life into otherwise dour or even dull moments.

While Ayane may steal the show this go-round, Volume One is very much Rori’s story, and while the supporting characters get little definition Rori is thankfully provided with enough nuggets to make her an interesting protagonist to follow. Rori’s story is one of mystery, and not just because she has magical powers she can’t control. Rori’s history with her father is kept purposely vague but its made clear that it is one Rori would rather forget. In the moments between all the supernatural action Rori is shown as someone that struggles with self esteem, anxiety, and even self-injury in one of the stories most fascinating pages.

These glimpses into a normal teenage life and the struggles therein, while well done, are again, regretfully short lived. No doubt both Rori and her supporting friends will be fleshed out in further issues but one cant help but feel that Wayward unnecessarily barrels forward, when it could have easily slowed down and given us more time with its characters in the quieter moments. Instead the series is intent on needlessly jumping from one supernatural conflict to another with little regard as to why.

Speaking of which, lets finally address the elephant in the room.  (Feel free to insert whatever the Yōkai equivalent is for that metaphor.)  The supernatural elements of this story, when taken for what they are, are well done. Each of the creatures within Wayward are artist Steve Cummings interpretations of Japanese folklore. His art, which is generally great throughout, will be hit and miss for many when it comes to these interpretations of the ancient Yōkai creatures and spirits that inhabit the world. Some, such as the Kitsune, are pretty terrific while others, such as the Kappa, look rather humdrum. These issues however could be attributed to the color work instead, as some characters just don’t pop off the page as they should while others don’t look as defined.

Unfortunately any context for these creatures, be it backstories or reason for being, is nonexistent. Both Rori and the reader are thrust into a world of strange monsters and exciting spirits but only the reader seems to want to know more about this fantastic realm that lives just beyond our own. (Thankfully at the end of the Trade there are brief reports on the history of each creatures folklore, but its outside of the narrative and included as an extra) Sure, Rori continues pushing forward but not once does she just sit her group down and ask questions like what the hell is actually going on. There is a moment near the middle of this Volume when the group gets together in full for the first time, but instead of discussing the events that have led them there, they take the moment to simply promote Rori as the leader of the group. Now “in charge” Rori then proceeds to lead them blindly into danger as she follows one of her visions, disregarding preparation or any form of planning whatsoever.

The final battles that close out this first chapter are, for the most part, well done. They include genuine moments of unease and tension and a sudden but brutal action that will no doubt have large ramifications for the next act. The action panels within Wayward are easy to follow and while combat is rather tricky to pull off in comics, Cummings handles it with ease whilst also showcasing some standout art pieces. Too bad some of the action material is lessened with the fact nobody questions how a certain character is not killed. Really? Nobody is going to question how this person was stabbed and eaten but yet still lives? Come on!

Waywards concept and the heritage it pulls from can absolutely create a standout comic from Image, but as of Volume One its pacing issues and story shortcomings just hold it back too much. The tale of Rori Lane is intriguing and I do wish to learn more about the ensemble she has found herself with at the end of these five issues, but its a pretty terrible outcome when you cannot name more than two characters in a story and you find yourself continually questioning the actions the characters are making.

Pacing in comics is difficult and a writer has an unenviable task of pulling a reader in, creating likeable characters, and giving you reason to come back month after month in only 22 pages. Its incredibly difficult but in the case of Wayward, writer Jim Zubs had my interest within the first 12 pages, so its a shame he felt a pressure to move more briskly than was actually necessary. Let us fall in love with these characters and allow us to fully feel the weight of their problems by taking the time necessary. Fortunately for Wayward I am willing to take the plunge on Volume Two, I just hope it remedies the issues this freshman chapter struggled with.