“From the ashes of a dated franchise, a survivor is born”

Tomb Raider is a series I was never really fond of to be brutally honest, I played them off and on but never took the time to complete any of them. The stories never won me over or made me want to see what Lara would do next, they just kind of existed, not horrible nor great. So imagine my surprise when in E3 of 2011 a trailer for the next Tomb Raider had me drooling over the idea of playing the next entry in the series. The trailer was intense, harrowing, and very reminiscent of an Uncharted game. Fast forward a year and a half and I can safely say the Uncharted similarities where not only for the trailer; but that’s not necessarily a bad thing either.

The story of Tomb Raider follows Lara croft after she finds herself in a shipwreck somewhere within the Dragons Triangle. As she awakes on the shore she is greeted by a scene right out of the beginning of Lost. The survivors are scattered and trying to help one another. Upon realizing what is happening Lara is knocked unconscious and reawakens hanging from a sack. It is here you take control and begin to unravel the mysteries of the island while you try to desperately escape. As you play you will follow Lara through some harrowing moments, its in these scenes you find yourself afraid of what may happen to her. This is what the story does wonderfully, it makes Lara that likeable character she once was. The voice actress does a wonderful job bringing Lara to life like never before. I honestly would rank “new” Lara as one of the best characters in any action video game.

Many have said it, but it is true; Tomb Raider is an Uncharted clone. But is that good or bad? Well a bit of both really. For those unfamiliar with Uncharted, it is a great adventure series that takes inspiration from Tomb Raiders of old, but more importantly from Indiana Jones. The Uncharted series is a fun trilogy with some intense gunfights and decent stories, but what its really known for are those huge cinematic moments that make it feel more like a movie than a game. For those reasons anyone familiar with Uncharted will experience a bit of deja vu with Tomb Raider. I have personally played Uncharted 1 and 2 but I still had a great time with this title. The gunplay is very tight and actually feels better than that of Uncharted.

Now this gunplay ties into an issue brought up by almost everyone who has reviewed the game; Lara’s first kill within the game is an emotional and shattering moment for Lara, but only fifteen minutes after that scene she is gunning down dozens of more soldiers. I feel like this is a minor issue, but from a story telling stance it can be a concern, still this is a game first and foremost and ultimately it doesn’t take away much. My complaint of the early story is I feel as though Tomb Raider should have focused more on the survival aspects and tied it to the gameplay better due to it being a huge focus of the marketing campaign. The hunting of animals is never a must, apart from one moment. Its there for you to get more experience and that’s about it.

On the Audio and presentation front Tomb Raider is fantastic. The island is very well laid out and believable. As you progress throughout the game you unlock new equipment in a metroid-vania style. This keeps you on the look out for areas in the environment, even ones you traveled previous and keeps the games backtracking far less of a chore than it would have been otherwise. The game graphically looks beautiful on consoles and really pushes them to their limits but if you have a PC that can run it, the game looks even better. Textures are extremely detailed and the lighting is terrific, the real standout however is new hair tech from ATI, TressFX. It may put a load on your system but the new hair physics are nothing short of mind blowing.

As for the games tone, to say this game is brutal is an understatement. Throughout your journey you may see Lara horribly killed in dozens of varying ways. The voice actress that voices Lara does a great job of making Lara a very likeable character, but also a vulnerable one as well. The gritty and haunting tone of the beginning eventually lightens up as the game progresses, and so does Lara’s sense of frailty, possibly to a fault. As the game reaches its final act Lara is in charge and Camilla Luddington does a great job showing every range of the character. It must be said however that even the voice actors for the secondary characters all bring their A game, sound design in general is terrific across the board.

The biggest issue with Tomb Raider is the forced multiplayer. The shooting works and is tight in the single player campaign but when playing in a multiplayer setting it just feels clunky and doesn’t work. The maps are interesting in their lay-outs but in execution they just aren’t fun to run around in. The game comes with the basic game types such as Deathmatch, Team Deathmatch, Capture and hold, and a kill and collect type. While its a decent offering, it isn’t memorable in any real way and should not be the reason anyone is picking up Tomb Raider.

Overall Tomb Raider is a great experience; its intense, has an interesting story, and features really likeable characters you can get behind. The multiplayer may be tact on and some of the ride may feel too similar to Uncharted, but overall if your going to do a reboot, you want it to turn out as well as this. – Jeff 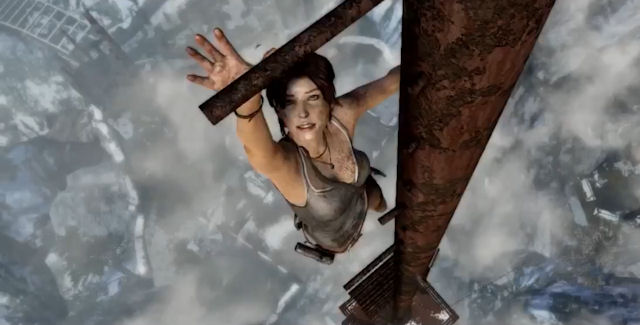